Help your colleagues stand out! Encourage, support, and celebrate certification when you download materials from PNCB. 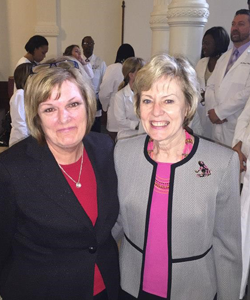 I remember taking the first exam well and the infamous disclosing pen that we were given. If you ordered too many tests, you were in trouble, or if you did not order enough. Since my PNP program was a certificate program, I am so glad that I took that first exam. I remember even proctoring a few of those exams before they became computerized. My professional journey has been varied. When I became a PNP, I was working at the Health Department, and my supervisor encouraged me to get my PNP. When I returned from getting my education, I was assisting a pediatrician with special needs physicals and he asked me if I would like to work for his group of pediatricians. I took the position and became the first PNP to be hired in Austin, Texas. I remember having PNP meetings in our living room when we were just getting started.

Since my first employment as a PNP, I have worked with several pediatricians in the state and also began teaching. I later took a position at UT Tyler, and we began a collaborative FNP program with Texas Tech and later had our own programs. I developed the PNP program for both programs with the guidance of NAPNAP and PNCB. I met some fantastic people along the way. I value my time spent with NAPNAP and serving as a PNCB item-writer.

In my current employment as a nursing education consultant at the Texas Board of Nursing, I have an opportunity to work with educators beginning to offer NP programs in our state as well as individual APRNS. Last year, I even had the opportunity to be appointed to a NCSBN APRN committee. I was recognized by the Texas Legislature in Resolution HB 1687 as the first NP in the state. That was such an honor. Looking back, I can see that even though it was not required, I took the certifying exam, I made application to the state when they started to recognize APRNs, and I would encourage every APRN to take advantage of every opportunity to further their education and the good work that APRNs are doing across the country. We have come such a long way.

I have to say this, I truly feel that PNCB has been a leader in establishing how certification should be done. I look back at the historical data you have on me of every CE I have ever done. You kept records that I did not even know you had! The process for recertifying is excellent. I just finished a primary care update last week! Thank you for the opportunity to share my journey, and I thank you. 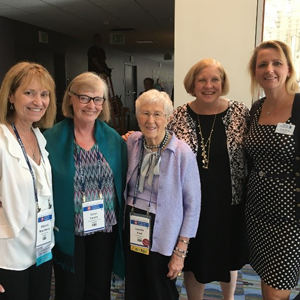 The one thing I can say about being a PNP is "PNP has been very very good to me." The best part about this role is that I have had many many opportunities to use my expertise in a huge variety of settings; hospital, home care, schools, health departments, and most importantly as an educator. I have had many wonderful experiences, and I worked with one of the original presidents of NAPNAP. Long before there was internet, I was able to network with another former president to obtain a job. And of course most significantly for those of us who started in the early days, I have met Loretta Ford, was included on a CD about her life, and recently when I was at the AANP meeting, I walked up to Loretta (with several other NAPNAP current and former board members) and she looked at me and said, "Oh good, at least I KNOW you!" She had been patiently standing for pictures with anyone who wanted and clearly was relieved when she saw folks that she knew. So for a PNP to have the founder "know you" is a huge milestone.

I went to the first PNP program at the University of Iowa in 1972. Before the days of Medicaid, the Public Health Nursing Association for which I worked held well baby clinics so that low income children could get their vaccinations for free. The medical staff for our rural clinics were local physicians who donated their time. They were only too happy to give up this responsibility. I remember one day the physician was very late getting there. In those days he made the 30-mile trip to town to make rounds at both hospitals. I decided to pinch hit and start doing his exams. He walked in--saw me covering the clinic--and never came back.

I remember another incident in which I was making rounds on the new mothers whose babies the pediatricians I was working for were taking care of. Hospital administration called the physician up to ask what my role was in the hospital. They decide to ignore my presence and allow me to continue because they didn't have a policy or procedure to give hospital privileges to non-physician providers. 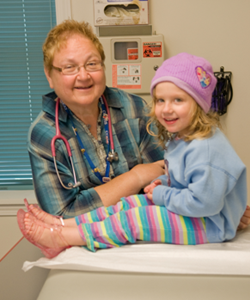 Nothing to really guide you for that first exam. No guides, hints--you just went. I remember I drove down to Boston and back in the one day with the exam in the middle. In those days it was close to 4 hours one way. There is something to be said about being young and foolish.

There were no nurse practitioners in this part of the state of New Hampshire and none for many years. Patient acceptance was slow but the worse was hospital nurses not wanting to accept me even ordering a bilirubin on a newborn. The hospital didn't know how to credential. I would get the cold shoulder, after all, "You are just a nurse." Five years later I left that employer and started to work for a Community Health agency which now has more mid-levels (I hate the term) than MDs. I was the first NP to serve on the Board of Nursing, and to this day there is always a NP. NPs in New Hampshire come under Nursing not Medical Board. Little did I know life would be like this 40 years later. I have my own caseload and especially like working with developmentally challenged children and schools. 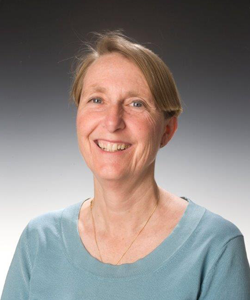 My, the years go by! I'm still working full time in a Community Health Center (Outer Cape Health Center in Provincetown, MA) and still love it. I was one of the lucky ones in 1976 as my education at Northeastern University in Boston was paid through a program sponsored by Senator Ted Kennedy. I went back to Northeastern in 1980 for my FNP certificate.  I love empowering my patients to live healthy lives.

PNCB-certified nursing professionals work in a variety of roles and settings throughout the US and beyond. Share your photo today!

Whether you’re an individual nurse or an entire organization, learn all the ways to earn recognition for yourself and your colleagues.

Become a CPN Champion to receive special gear, materials, a Recert benefit, and more! Explore other PNCB volunteer roles too.

You get outstanding service from our customer care team. Let us know your questions so we can help!

Our offices are open Monday to
Friday from 8:30 am to 5:00 pm
Eastern Time except for holidays.